While having lunch with John in Bermuda, I brazenly asked him for a job in the recording studio. “We'll see,” he replied. “I'll ask mother.” The answer to my request came a few weeks later when he returned to New York in August. 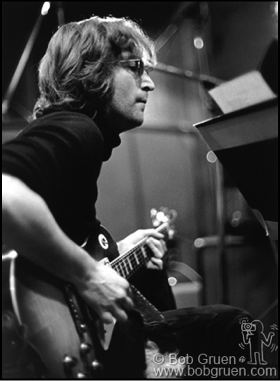 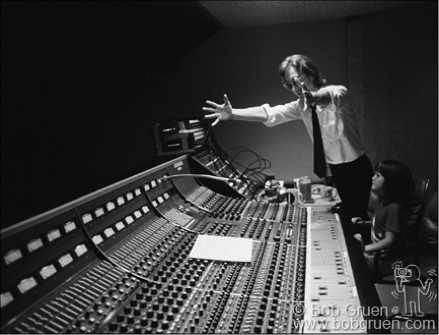 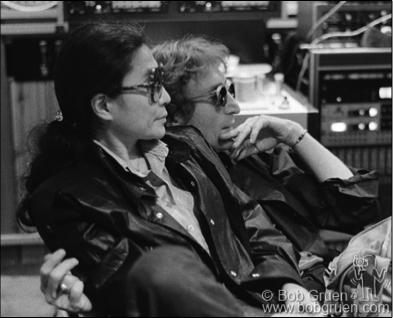 NOTE:  All the quotes from the Double Fantasy recording sessions are transcribed from the reference tapes, which run into hundreds of hours. Jack Douglas bugged the studio in response to an off-hand remark by John. According to Douglas, he said, “I wish someone would wire the control room, because all the best things are said in here.” Jack gave the tapes to John as a birthday present.

me. When he invited me to visit him in the studio, I always came away feeling sorry for myself. Later, when the sessions were over, I had the opportunity to listen to several hours of the reference tapes, which recorded all the musical takes as well as the chatter among the musicians.

“I get so excited we're recording,” John told those in the control room. “You know I used to be pretty big in this business before I took my shoes off.”

It was his first recording session in five years, and he behaved like a giddy teenager in love. After a day or two of working with the band, crafting the sound he wanted, the sessions began. Whenever there were delays, he would recall old times or play Beatles

Meanwhile, the musicians haggled about the chord changes. The delay lasted several minutes—John became agitated. “Okay! Okay! Let's do it before the drugs wear off!” he quipped.

Finally, sensing John's irritation, Douglas announced, “We're rolling!” But before he gave the band a countdown John declared, “This one's for Gene, Eddy, and Elvis . . . and Buddy!”

songs, entertaining the musicians. During one long delay, Tony Levin, the bass guitarist, began improvising on the sheet music.

“That's lovely!” John said. “I love it. They didn't have that in those days. That's the only thing they didn't have—a good bass!”

“John, we're all set,” interrupted Jack Douglas. “Are you ready for a take?”

During another session, just as the twenty-four-track tape machines began to roll, lead guitarist Hugh McCracken interrupted John to ask about a chord change, everything came to a halt.

“It's the same one in every song!” John snapped. “I only know ten. Why doesn't somebody blindfold that guy, instead of looking at these fuckin' sheets?”

He told me Yoko had already decided on the staff; I would keep track of the tapes, and mostly be relegated to the Dakota. After his comment years earlier, about my horoscope and musical talents, I'd hoped he would fight for

The master vocal tracks took several weeks to record. Most completed with two or three takes. John recorded the songs first, and then have the band back him while he played rhythm guitar.

One day, while recording guitar overdubs, Yoko announced from the control room talkback mike, “Sean is here.” John's son walked up to the window that isolated the room from the studio and pressed his face against the glass.

“I can see the picture,” Sean shouted to his father.

When John had finished a guitar overdub, he joined Sean and nanny Helen in the control room. While he waited for the engineer to check the recording, John chatted with Helen.

“We never have to shut up for dad. He's always spouting off,” he said.

“Another beer, please!” Sean interrupted his father. So Helen took him out of the studio, while John retuned his guitar before the next take.

“Are you leaving?” he called. “Au revoir my dears; I'll see you later, or tonight, or tomorrow, or whenever.”

Photos of John and Yoko in the studio courtesy of Bob Gruen.

All photos are used in a nonprofit, educational context with the claim of fair use.

This web site is copyright © 2020 by Michael Barbosa Medeiros.

A few days later, he worked late into the night recording guitars overdubs on “Starting Over.” He sat beneath a halo of light, alone in the darkened studio. Music stands, microphone booms, and sound partitions cluttered the empty room. Chairs poking from the shadows, looked like tombstones. Before the take, he quipped, “Live from the cemetery. Live from Forest Lawn.”

Later, when he listened to the playback over the control room speakers, John was uncertain. “He kinda' rushes it, I don't blame him. He's so excited; he can't wait to start. Who is that fucker?”

“Hello! I can see you,” John said. “I'll come in and say hello in minute. Isn't it a funny place, like a space ship, isn't it? Did you see your picture?” A large color photograph of Sean had been taped over the television screen above the window.

The engineer interupted John's banter to announce the tape machines were now ready with the reels for the “Woman” tracks.

“Put me on in the intro,”he told the engineer, “I wanna' say something . . . whisper something.” As the recording begins, John exhailed into the microphone, “This is for the other half of the sky.” After he listened to the playback of his double-tracked vocal, he pronounced, “I was just trying to think who this would be good for. Somebody should have a hit with this. Not me. We've made a good demo.”  